In the Spring of 2014, I drew my personifications (if you could call them that) of the four classes I had that term. ALL of them were based in chemical engineering, and so I had no respite… 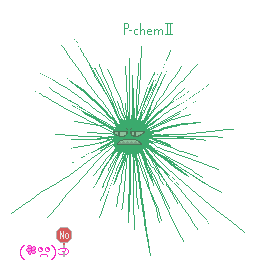 P-chem II was at first glance a frightening class, since P-chem I was scary enough (it was quantum mechanics!). But after a while, the class revealed itself to be Thermo’s cousin. Thermo looks very similar to P-chem II, but it red instead of green. Unlike its ferocious cousin, P-chem II is tired and just wants to go home. A simple “No” should suffice to keep it away. 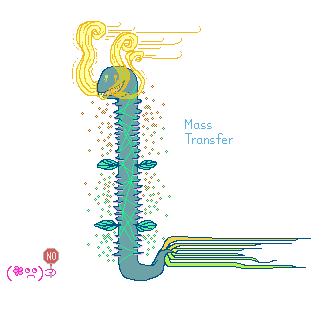 Mass Transfer was a mysterious class that dealt with distillations by its end. The eel’s body is a distillation tower, with green particles diffusing out of the lower end of its body, while lighter, more orange particles float away from the higher portion of its body. The eel’s mouth issues steam, and its tail flows away as a liquid.

Quite a scary class due to its new material, and deserves a “NO” in a futile attempt to preserve my GPA. 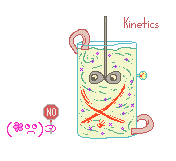 Another extremely frightening class, Kinetics mixed reactants in huge vats called CSTRs (continuously-stirred tank reactors), causing purple reactions to take place inside. Mixed with a tiny fan turbine coming mysteriously from up above, its contents curdled as flesh-colored tubes poured new material into the vat’s top and drained some away from its bottom. A temperature gauge spoke to you, but it could not quell your fears. A large red ‘X’ drawn in blood to represent the symbol for the Extent of Reaction can be seen, labeling the reactor. Just underneath the mark is a blood-soaked handprint. Not a class one would want to trifle with, and one that gets a “NO” for sure. 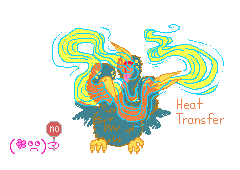 In normal settings, Heat Transfer is likely a very formidable foe. However, its professor clipped its wings and talons, leaving a pudgy, defenseless, and easy class to deal with. A three-headed bird with multiple eyes, it handled streams of heat deftly, regurgitating and directing and swallowing the thermal flows amongst themselves. Such a weakened bird only needs a “no” to keep its GPA-withering abilities at bay. Little did anyone know, but it would regain its original form in the class final…