This picture came from a sketch I drew rapidly to Eminem’s “Rap God” in November 2013, and when I finished it, I looked closer at the smoke lines and thought, “oh no, how in the world am I going to clean those up in Photoshop?!”

A long procession of anatomy-fixing, line-widening, and smoke-positioning occurred, with more lines added to the smoke. Then, I colored the picture and individually smudged the horizontal texture. Once finished, its lineart was set in a style I have that I call ‘Mass Fract’, which involve thick lines sliding against each other, as you see on his head here.

Because I don’t feel like it’s immediately evident, I will try to explain this picture: A stylized deadmau5 wades into the brackish waters of experimentation and raw creative fodder. Lost and disoriented, he is surrounded by the smoke he creates, which is luminescent in its own right. The smoke represents his own creative output, which was material in his environment that he modified by burning it. The essence of the output wafts around him, as music does in the air. The smoke itself is made of many peaks upwards, much like sound waves.

His ears are torn from his work. The music-as-smoke is constantly changing and folding into itself again and reforming and falling and crunching and elongating as the mouse continues to wander through the murky ideas of the early morning. 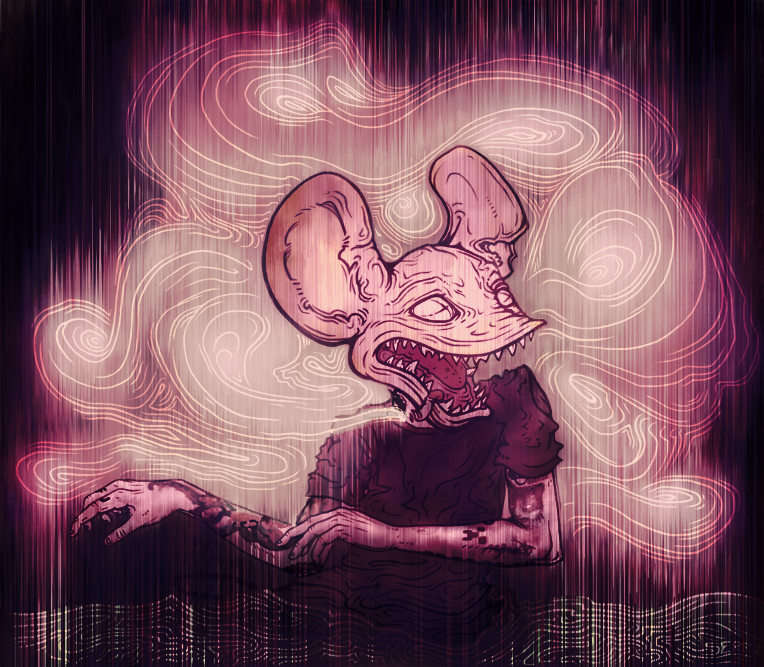 This picture has had many previous versions, and the first was much brighter, and deadmau5’s face more doughy: 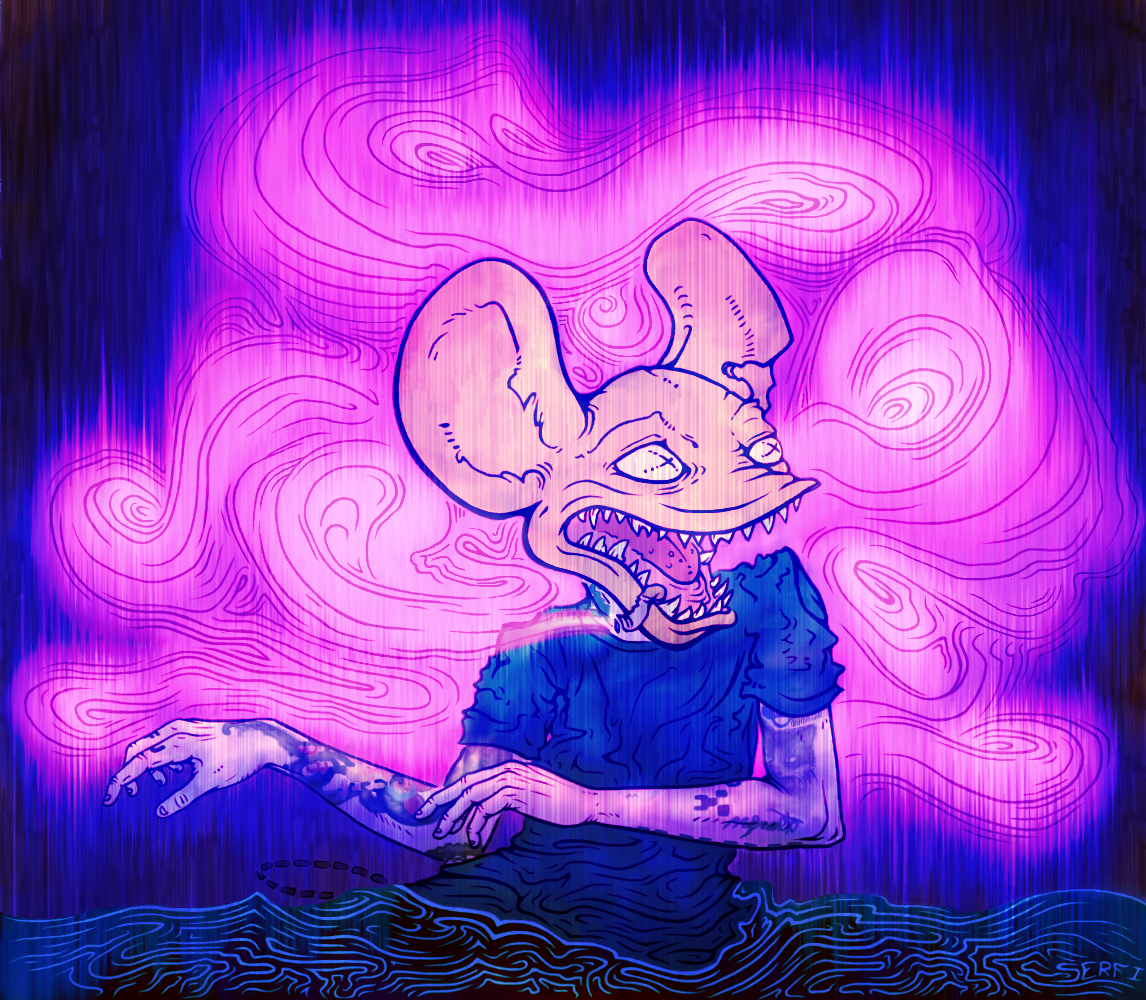 Once 71C was created, I renamed this picture for that track. Now the mau5 is moving through waters of 344 Kelvin, which is equivalent to 71 degrees Celsius. It helps that I imagine that song to have very blue shades, even though 71°C is about 160°F. The mau5’s face is still not as lined or as gaunt as it will be in the end. 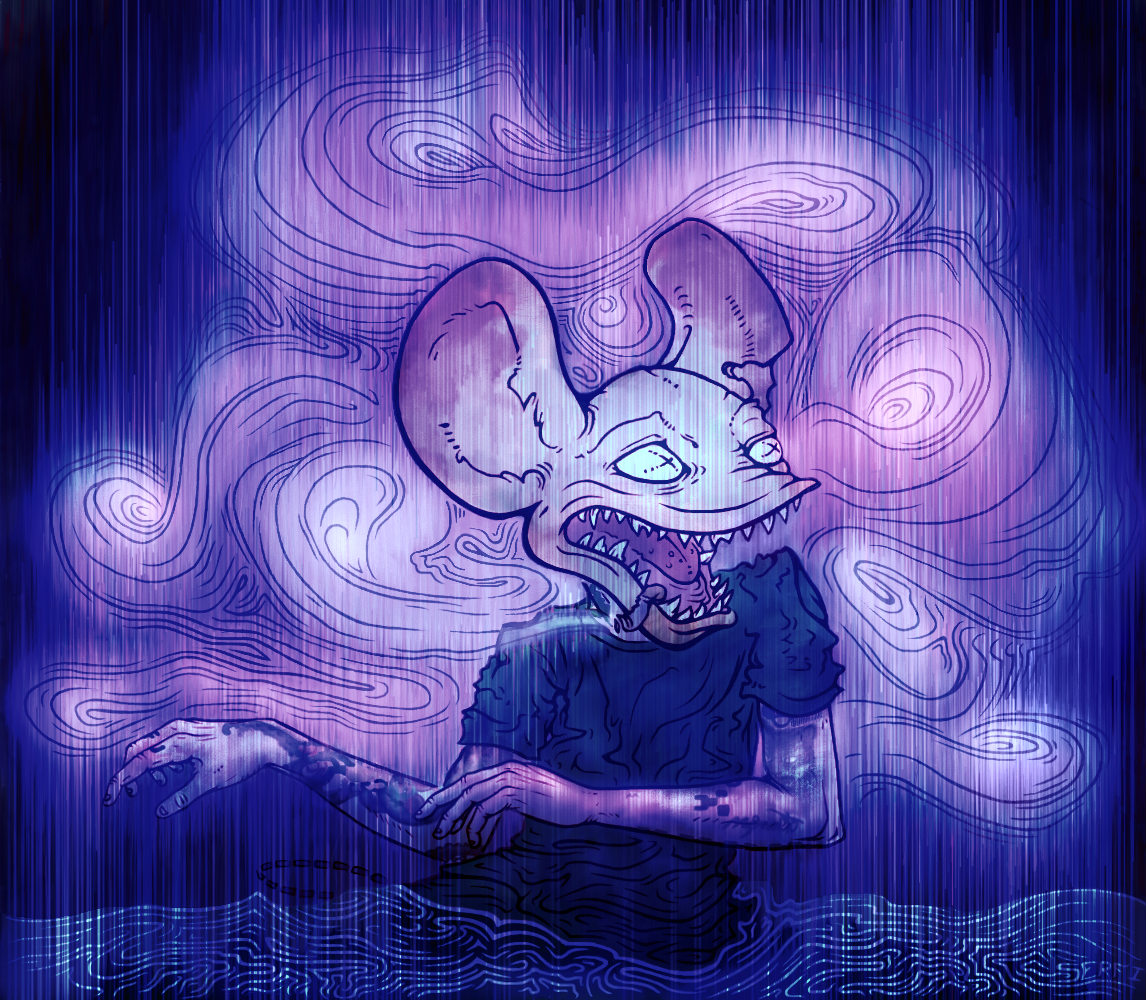 Here’s the long progress animation. What this doesn’t show you very well (being limited to a gif’s color range) are the subtle changes in smoke color closer to the end. The picture was intensively optimized to its current colors.